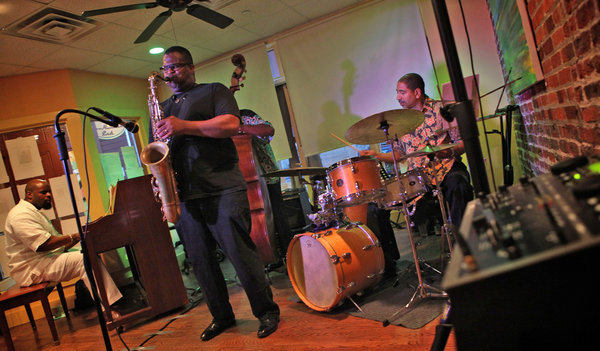 Susan Stava for The New York Times
ON THE BILL Ray Blue with his band at the BeanRunner Cafe.

TEMPERATURES soared outside the Division Street Grill in Peekskill on a recent Saturday night. But inside, the unflappable guitarist Bucky Pizzarelli and his longtime bassist, Jerry Bruno, were playing it cool with well-worn standards like “Satin Doll” and “Tangerine.” And their subtle, sly treatment struck a chord with the 40 or so diners, who applauded faithfully between bites of pan-seared tuna and penne Bolognese.
more
Posted by Who is Bob Baldwin/NewUrbanJazz at 12:28 PM

What We are Following

Promote Your Page Too